The Prize was set up in memory of Christopher Ewart-Biggs, British Ambassador to Ireland, who was murdered by the IRA on 21 July 1976 by a bomb placed outside the Embassy residence underneath the route of his car. The attack also killed Judith Cooke, Private Secretary to the Permanent Under-Secretary of the Northern Ireland Office, and severely injured two other passengers.

At a service in St Patrick’s Cathedral, Dublin a week later Garret Fitzgerald, then Minister for Foreign Affairs in the Irish Government, said:

“Our two peoples, whose pasts have been so closely linked for good and ill throughout eight centuries, have confounded our common enemy by responding to this tragedy with a deepened sense of our close interdependence, and of our common interest in combating violence and averting anarchy”. 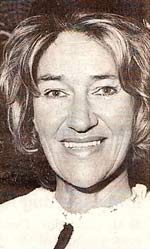 This was borne out by the generosity of spirit shown by Christopher Ewart-Biggs’s  widow Jane, who founded the Memorial Prize to bring, as she said, some good out of the tragedy. She also founded a community prize which recognized cross-community achievements within Northern Ireland.

Hear Jane Ewart-Biggs interviewed about Christopher Ewart Biggs’s hopes for peace in Ireland. (You will need an Athens or Shibboleth ID to hear both the recordings).

View an interview with Brian O’Driscoll, driver of the embassy car, on the day Sir Christopher and Judith Cooke were killed. Includes footage of the scene of the explosion.

Jane was appointed to the House of Lords in 1981. After a distinguished life of public and political service Baroness Ewart-Biggs died in 1992. See News cuttings for obituaries.